You’re Invited to be Inspired by Award Winning Artist Stefan Sous on September 27, 2016

The Academy of Art University School of Architecture presents:

Stefan Sous is an award winning artist from Düsseldorf, Germany. He studied at the reputed Art Academy of Düsseldorf under renowned English artist Tony Cragg. Stefan Sous‘ artwork and installations have been widely exhibited in museums, cultural institutions and public spaces in Germany, Austria, Belgium, the Netherlands, Switzerland, Romania, Brazil, Namibia, Cuba, and South Korea. His extremely diverse oeuvre ranges from light, laser and video installations, large-scale steel sculptures, spatial installations, exploded sculptures and other art pieces. Much of his artwork explores spatial and tectonic ideas and concepts that blur the boundary between art and architecture. Another quality that can be attributed to many of his works is a certain irony and sense of humor the leaves the spectator with an uncanny amusement that often questions the status quo.

Many of his works of art are conceived for public spaces. His gigantic sculpture for the new building of the Federal Intelligence Service (BND), the equivalent of the American CIA, was contracted by the federal German government.  The untitled sculpture is conceived as an autonomous and strange thing, which is a subtle reference to the function of the BND – to explain the unknown while protecting its own secrets. In the transition of a monolithic slope at the buildings entrance, the cantilevering sculpture is deliberately placed at a tipping point of the surface, seemingly almost out of balance.  The structure consisting of weathering corten steel is intended to remain independent of its content: “I have approached the secret service through means of secrecy, without directly illustrating it” says Sous.

Throughout his career Sous has worked with a number of Architects, Designers and Landscape architects. In his work he is truly crossing the border between disciplines, the construction of some of  his pieces is as demanding as a complex building.

This event will also be live-streamed  and recorded at https://www.youtube.com/watch?v=rmVALkU3Z9U 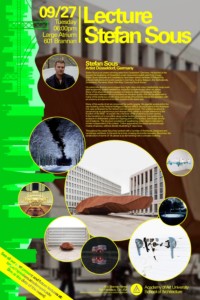