Wes Jones is a partner in Jones, Partners: Architecture, a California-based architectural practice

founded in 1993. His technologically inspired designs for completed buildings and theoretical

South Campus Chiller Plant for UCLA. The work of Jones and J,P:A has been featured in

countless publications and exhibitions, and can be found in the permanent collections of

most leading design museums, including SFMoMA, CCA, and FrAC.

Form and El Segundo, and plans are underway for a current volume, to be titled Alameda.

The LA Forum has published Meet the Nelsons, a collection of the Jones’ cartoons from

ANY magazine, and Actar has just released SouperGREEN, an analysis through design of

current environmental sensibilities in architecture by the firm and its alumni.

from the American Academy of the Arts and Letters, Jones was recently named one of the

Education. Jones has written and lectured internationally on technology and the work of the

firm, and has taught in the schools of Architecture at Harvard, Princeton, IIT, Columbia, UCLA,

the Ohio State University, SCI-Arc and now USC. Most recently he held the Frank Gehry

Chair at the University of Toronto, and Howard Friedman Professor of Practice at UC Berkeley.

Jones is licensed as an architect in California, Oregon and New York. Jones is currently teaching

at the School of Architecture of the University of Southern California, where he is serving as the

Director of the Graduate Program. 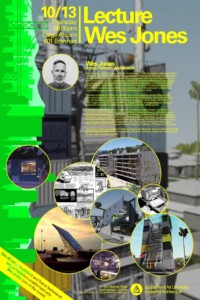