Simon Battisti is an architect and educator based in Tirana, Albania. He is curator of the Albanian Pavilion at the 2016 Venice Architecture Biennale, with Leah Whitman-Salkin and Åbäke. He is director of Atelier Albania Academy, an architecture research platform based within the National Territorial Planning Agency of Albania (AKPT). There, Battisti leads short- and long-term critical research on the intersection of planning, international development, tourism, cultural heritage, and identity.

He was a Fulbright Fellow in Albania in 2014–2015. His research focused on the development of central Tirana in the 1990s, and sought to illuminate the methods by which the family, as opposed to banks, functioned as the primary financier of high-rise construction.

He holds a B.Arch with distinction from the Southern California Institute of Architecture, and an M.Arch from the Harvard Graduate School of Design. As a student at the GSD, he helped reestablish the school’s tradition of student publishing, founding the journal Very Vary Veri in 2013 after a twelve-year hiatus. He is editor of Flexible Leviathan: Reconsidering Scale and Fixity in Iztapalapa, Mexico City (Harvard GSD, 2016), with Diane Davis and Jose Castillo. He writes regularly about architecture and urbanism, most recently in Log, Clog, and many others.

This event will be recorded and live-streamed at https://www.youtube.com/watch?v=E7uu3FUWJPk 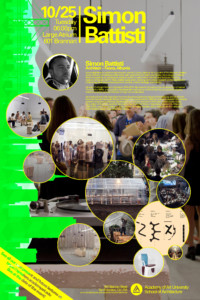