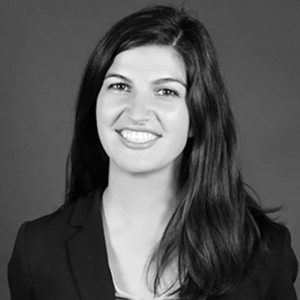 Eoanna Harrison is currently an Architectural Associate for the City and County of San Francisco Bureau of Architecture (BOA) and a Licensed Architect in California. Her career at BOA has ranged from health care to recreation centers to homeless transitional housing. She is very grateful to be able to use design as a tool to make an impact on her surroundings by working on civic amenities that get used by the public every day.

She worked as Construction Crew Leader with Habitat for Humanity supervising teams of up to 20 volunteers daily in wood light frame construction. Eoanna Harrison assisted in the construction of over 25 LEED Platinum homes from foundation to framing to finish. In addition, she has built with Global Village in the Dominican Republic working on CMU housing and with Global Brigades constructing a medical center and an addition to a school in Honduras.

Eoanna Harrison received her Bachelor of Science in Architecture from the Knowlton School of Architecture at The Ohio State University graduating Cum Laude with Distinction in Honors. She was the recipient of the AIA Columbus Award in 2009 and 2010 and a James Gui competition finalist. She continued her education at the University of California, Los Angeles for her Masters in Architecture where she had the opportunity to work on research and independent studies focusing on design/build projects. Kester Learning Garden was built with the help of EnrichLA to design and build an outdoor garden for Kester Avenue Elementary. Self-Lifting Mobility Project is a livable, movable trailer hitch which was featured in the Kaneko Museum’s “Truck-A-Tecture” Exhibition as well as several web magazines such as designboom and archinect.

Her current projects include a clubhouse for Margaret Hayward Playground in the Western Addition of San Francisco and Alameda Creek Watershed Center, an interpretive museum in Sunol, California.